Paul McCartney played Saturday Night Live on Dec 11th, turning in a pretty good version of "A Day In The Life" which he combined with an audience singalong version of "Give Peace A Chance".

Joanna Newsom's 2010 disc "Have One On Me" has steadily been winning hearts this year, and after December 14th its safe to say that David Letterman can be added to her list of admirers. "On A Good Day" is one of the shorter tracks on the album, and an excellent introduction to the Californian harpist's amazing work.

It has taken us a while to digest Bruce Springsteen's "The Promise" box set, but we can report that it is an outstanding package, including as it does a great "Making Of" documentary, as well as a complete 1978 concert DVD recorded in Houston. We sample a few tracks from that incendiary show, including "Badlands" and "The Promised Land".

Dean and Britta recently recorded a soundtrack DVD for Andy Warhol's "Screen Tests" and played a series of fall dates in and around their hometown of Manhattan. The duo have lately been drawing on Dean's early back catalogue - their take on the Galaxie 500 classic "Tuggboat", recorded at the Ace Hotel in New York as part of the CMJ music marathon, is a sonic treat.

Captain Beefheart, AKA Don Van Vliet, passed away last week. We play you a bit of "This Is The Day" from his 1974 appearance on the Old Grey Whistle Test. Rest in peace, Captain. 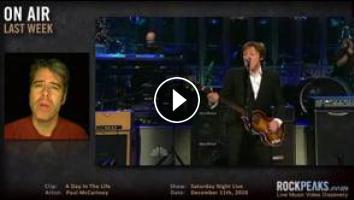 Paul McCartney played Saturday Night Live on Dec 11th, turning in a pretty good version of "A Day In The Life" which he combined with an aud...